Another buyer, but rejected by Christ

Breaking news: In a letter dated 12/23, the owner of Bayonne Medical Center and Hoboken University Medical Center (Hospital Holdco LLC) made an offer of $91.6 million to buy Christ Hospital, including $35 million for working capital and capital improvements. While this offer appears to be substantially more than the deal Christ is pursuing with Prime Healthcare, it was immediately rejected by Christ Hospital.

Posted by Paul Bellan-Boyer at 12:04 PM No comments:

Last night PBS's NewsHour aired a report that Prime has a systematic practice of upcoding, over-diagnosing patients in order to get higher Medicare reimbursement rates. Great for Prime's profits, terrible for the American taxpayer.

JEFFREY BROWN: And speaking of Medicare, America spends more than $500 billion every year on Medicare for elderly patients. Now, as the cost of health care rises, many are examining exactly how that money is spent.

Our partners at the Center for Investigative Reporting have conducted a yearlong probe into one prominent hospital chain's Medicare costs. In an online report released Sunday, the center's California Watch project examined whether the chain is attracting the toughest medical cases, or is exaggerating conditions in order to increase revenues.

Our version of that story is reported by Lance Williams of California Watch.

ANNEKE DOTY, former Alvarado Hospital employee: It was very much there's a new sheriff in town.

See the full report at California Hospital Chain Eyed for Possibly Bilking Medicare for Millions.
Posted by Paul Bellan-Boyer at 9:18 AM No comments:

Protecting the Future of Christ Hospital

For nearly 140 years the residents of Jersey City and surrounding communities have been relying on Christ Hospital and its dedicated staff for safe and effective health care. Each year, the staff helps deliver more than 1200 babies; cares for over 8000 hospitalized adults and nearly 600 hospitalized children; treats more than 45,000 residents in the Emergency Room; and provides the largest inpatient pediatric service in Hudson County.

Christ Hospital belongs to the community it protects, and its future should not be decided by a handful of people behind closed doors. That is why community, civic and religious leaders have teamed up with healthcare providers and elected officials to protect our community hospital and its mission to provide care to all who need it.

There are justified concerns that Prime whopping profit margin of nearly 18% comes at the cost of communities' access to safe, quality patient care and reflects a policy of putting profits ahead of patient care needs.... Many of Christ Hospital's services aren't profitable - but they are essential to the health and well-being of our community. For example, more than 75% of Christ Hospital's psychiatric and behavioral health patients are uninsured or under-insured. But since Prime also makes their money from dropping insurance contracts, whether you are insured or uninsured - your access to healthcare might be at risk.

See the full article, by Michael Yun, President, The Central Avenue SID and Ann Twomey, President, Health Professionals and Allied Employees: Protecting the Future of Christ Hospital - for our community.

Posted by Paul Bellan-Boyer at 2:43 PM No comments:

Congratulations to the community on 12/14 meeting!

Thanks to all our partners, the speakers, and especially to engaged members of the public who helped make last night's meeting a success. We counted over 120 people in the room at one time, for a total attendance of about 140.

See the article in today's Jersey Journal: "Amid a standing-room-only crowd of more than 100 last night, Peter Kelly, the CEO of Christ Hospital in Jersey City, defended the proposed $15.8 million sale of the hospital to California-based Prime Healthcare Services... Many [audience members] wanted to know if Prime could honor the five-year deal and then close the hospital. 'Why can’t you give us a 30-year agreement, or are you trying to get the deal done as soon as possible?' asked Joel Torres, a Heights resident." See the full article, "CEO of Christ Hospital defends deal."

Thanks again to the community for caring about Christ Hospital and its future. We will continue to update you with fact-checks from the meeting, information about the proposed sale, and next steps for community involvement. 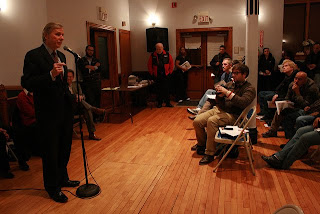 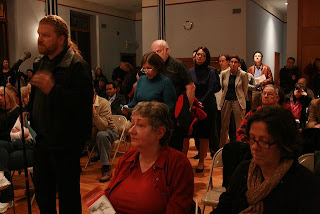 Posted by Paul Bellan-Boyer at 7:37 AM No comments:

As we have gone around the county talking to people about the proposed sale, we have heard many stories about the ways people are connected to the hospital. People all over this region are thankful for the place Christ Hospital has had in their lives, and concerned about the hospital's future.

Over the next few days and weeks, we will be asking people to share their Christ Hospital stories through our new Facebook page. Please visit http://facebook.com/savechristhospital and like the page. Then invite your friends. It's one of the things we need to help mobilize people to preserve the kind of healthcare we need in our community.

Posted by Paul Bellan-Boyer at 8:03 PM No comments:

Occupy Jersey City will have its General Assembly on the sidewalk outside Christ Hospital on Monday 12/5 from 4:45pm to about 7pm. They will be handing out flyers about the proposed sale of the hospital and healthcare in our community. Anyone in the community is welcome to attend.

Posted by Paul Bellan-Boyer at 3:06 PM No comments:

Come to a Community Meeting to hear more about the proposed sale of Christ Hospital, its effect on our community, and the issues involved. Share your opinions and ask your questions.

Download the flyer in English and Spanish and please invite your friends and neighbors. There is also a 1 page flyer good for shop windows. (Click on the link to view, or right-click to download.)

Parking is available at the Municipal lot at the corner of Central Ave & Bowers.

Posted by Paul Bellan-Boyer at 2:28 PM No comments:

In response to the proposed sale of Christ Hospital to a for profit company, New Jersey Citizen Action launched a petition drive to protect the mission of the community hospital.

"That's why a team of NJCA canvassers will be talking to Jersey City families about the sale," continued Eberle. "It's OUR hospital. It's been a pillar of the community for nearly 140 years. We need to make sure decisions are made with the input of residents instead of behind closed doors."

For 139 years, residents of Jersey City, Hoboken, Union City, Weehawken, and North Bergen have depended on Christ Hospital for quality healthcare, including urgent and acute care.

That is called into question by the hospital's proposed sale to a for-profit hospital chain. The hospital and its prospective buyer, Prime Healthcare, have asked the state to expedite its mandated review so that they can close a deal by the end of the year. But Prime Healthcare has refused to make any commitments about the kinds of service it will provide, the number and kinds of jobs it will keep, or what parts of Christ Hospital's valuable real estate it will retain for community use.

We ask that the NJ Attorney General and the NJ Department of Health NOT grant expedited status to their review of the sale, but give full review, with transparency and accountability to our community, and with conditions that will protect access to quality health care and services and the jobs of Christ Hospital workers.

Posted by Paul Bellan-Boyer at 4:58 PM No comments: